What Is Autonomous Vehicle Testing 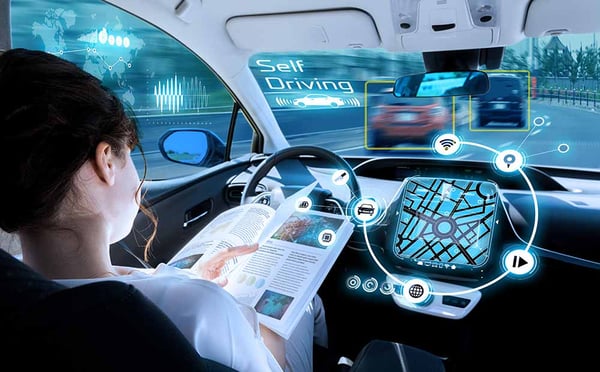 The Society of Automotive Engineers (SAE), recognizes six levels of vehicle automation which have also been adopted by the U.S. Department of Transportation. Understanding these is critical to answering our question of the day — “what is autonomous vehicle testing?”

So, what are the six autonomous vehicle levels?

Level 0 automation refers to cars that are 100% manually operated by the driver.

Cars on this level only feature driver-assist functions such as speed monitoring and control.

These cars can steer themselves and control their speed. However, they still need human monitoring and the person monitoring can take control at any time.

This is a step higher than level 2 as the vehicle can detect environmental conditions and respond accordingly. Human monitoring is still required.

Vehicles on this level can perform all driving tasks under specific conditions and use geofencing to keep cars from crashing.

This is the highest level of vehicle automation where the vehicle can take care of all driving tasks and doesn’t require human input or monitoring.

How Do Autonomous Cars Work?

For cars to successfully drive autonomously, several components must work together seamlessly. A few essential ones include:

Using sensors and geo-fencing, autonomous vehicles create and maintain maps of their surroundings for navigation. Cameras and ML systems detect traffic lights and other road signs as well as other vehicles and pedestrians. All the various inputs are then processed by onboard software which then plots the path the vehicle should take. The software then sends instructions to the vehicle’s actuators. These are responsible for driving functions such as acceleration, braking, and steering.

To ensure the vehicle follows traffic rules and successfully navigates through traffic and around obstacles, autonomous vehicles leverage a combination of:

What is Autonomous Vehicle Testing?

Technological advancements have led to the creation of advanced algorithms and robotics that are capable of taking over a driver's responsibilities. However, as much as technology has advanced over the years, it still isn’t infallible. And in the case of vehicles, it’s responsibility for the safety of the human occupants, other road users, and the environment.

So what exactly is autonomous vehicle testing?

Autonomous vehicle testing refers to the rigorous tests that are conducted on every part and component of a vehicle necessary to ensure it successfully functions autonomously. Besides mechanical functionality, other critical factors that are tested include:

The success of vehicle autonomy is mainly dependent on communication. That’s why various tests are conducted to ensure there’s clear communication:

This involves putting an autonomous vehicle in a real-world scenario (with safety measures in place of course). The test vehicle is then deployed and its performance monitored.

That’s why testing the depletion rate, dependability, and durability of batteries that power autonomous vehicles is important.

The Importance of Autonomous Vehicle Testing

While safety is the biggest reason for autonomous vehicle testing, there are other important reasons testing is essential. A few such include:

So, if you’re ready to take the automotive industry into its glorious future, work with us. We’re here to give you the support you need.