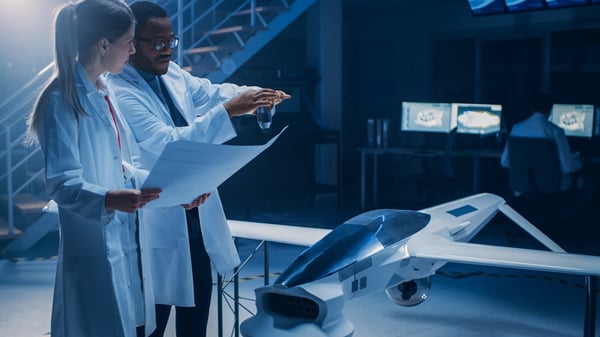 When you think of aerospace, materials aren't likely the first thing that comes to mind. But, beyond design, materials are hugely important for making a design work. In fact, the entire aerospace industry spends a couple dozen billion on materials each year, and that's only projected to grow in the future.

But you only have to look back 40 or 50 years to see how much has changed in the utilization of materials in custom aerospace components. Once upon a time, a given aircraft may have been as much as 70 or 80 percent aluminum due to its light weight and low cost as a building material. Other materials, while commonly used, were hardly major players with a few percent here and there.

Today, that same plane might be just 20 percent aluminum, though airplanes are both lighter and more rigid than they've ever been. Some of it is due to improvements in design, though the biggest gains have been in better materials such as carbon fiber reinforced polymers and various honeycomb materials.

While the amount of aluminum in custom aerospace components may be down from when it was introduced in the early 20th century as a state-of-the-art material -- after all, the first full-metal aircraft was created in 1915 -- it still matters. Anywhere from a quarter to a fifth of materials used in a modern airplane is made from aluminum, though that drops when you consider non-critical structural materials such as paneling and interiors.

The heavy stuff, like engines and landing gear, is still typically aluminum. However, that's precisely what's driving the adoption of new materials in aerospace design and fabrication. After more than 100 years in use, aluminum is still too heavy and lacks the temperature resistance to meet the demands of fuel efficiency and flight today.

To those in the aerospace industry, titanium, graphite and fiberglass have been widely used since about the 1980s, but the costs involved are typically too challenging to be viable in anything but the most limited circumstances -- or under the largest budgets.

Sure, aluminum may not be going anywhere as a lightweight and inexpensive aerospace material, but there are other metal alloys that are being developed that may eventually supplant aluminum as the favorite for important and custom aerospace components. These alloys are starting to take over structural needs rather than traditionally superficial uses, and even some materials that were thought to be impossible to work with due to physical or financial challenges are coming into their own.

For the important and critical engine, newer heat-resistant alloys made from titanium, nickel and even nonmetal composites like ceramic are starting to make headway against the use of aluminum. These newer materials can withstand temperatures up to almost 4,000 degrees Fahrenheit (more than 2,000 degrees Celsius), though their heat-resistant properties make them difficult to shape and bend without sacrificing structural integrity.

A couple of alloys that were developed 50 years ago -- titanium aluminide and aluminum lithium -- are also experiencing somewhat of a resurgence in custom aerospace components today because they're lighter, stronger and able to withstand higher temperatures than traditional nickel alloys. When it comes to turbine and compressor blades, heavy and dense nickel-based alloys are instead being made from titanium aluminide-based alloys.

Because heat resistance is such an important piece of aerospace component design, it's often a top priority when selecting materials for custom aerospace components. But the weight also matters, and that tradeoff is why composites are so interesting -- they're ultra-lightweight and highly resistant to heat, which makes them more fuel efficient and safer for everyone from the pilot to the passengers.

But what makes composites work is that they're built from various metals and plastics in such a way where the resulting composite is much stronger than any of the ingredients. That's why composites have doubled in usage roughly every five years since about the late 1980s.

The main types of composite materials are carbon fiber, glass and aramid-reinforced epoxy, though carbon fiber is much more common due to its rigid strength and lightweight. Some manufacturers have even started building wings out of this material, and that can represent huge fuel savings since it's estimated that each pound in an airplane carries thousands in fuel costs each year.

But one drawback of composite materials is that they can make custom aerospace components difficult to repair. Instead of swapping out a piece with a new replacement, repairs often need to be done by hand, which can add significant time and cost to any project. That said, innovation and progress is still taking place, and it's only a matter of time before various advances are able to better utilize composite materials.

Another advancement in custom aerospace component materials is with nanoparticles, but it's not for the common reason of heat resistance. Instead, it's the electrical forces of nature that are being considered. That's why metal-matrix nanocomposites are heralded for their electrical conductivity and high tensile strength. And that's just one type of nanoparticle -- there are also polymer- and ceramics-based iterations.

Ultimately the reason is that high up in the atmosphere, airplanes are vulnerable to lightning strikes that can fry metallic underwiring without warning. With nanoparticles in the CFRP wing, electromagnetic interference is no longer a serious concern. Some estimates put nanocomposites as a huge part of growth in aerospace engineering solutions over the next several years due to their strength and resistance to corrosion, impacts and other damage.

Due to its ability to boost the electrical conductivity of carbon composites in custom aerospace components such as fuselages, graphene is quickly becoming a go-to in designs and elsewhere in the industry. Just like nanoparticles, graphene is good with lightning strikes just when more and more materials are utilizing inert composites that don't provide a path to ground -- some even want to use them to create a conductive Faraday cage around the entire aircraft.

It's not exactly viable today, but it could be in the very near future, which is good news for miles and miles of electrical wiring in most commercial aircraft. In general, it takes about a decade for new materials to make their way from concept to use, meaning that by 2030 it could be a viable material for custom aerospace components of all types.